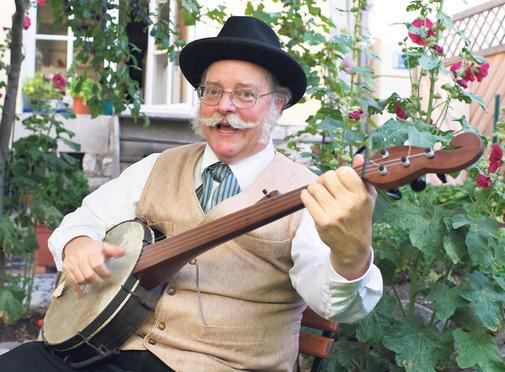 Clarke Buehling, a celebrated banjo performer, recording artist, instructor and educator, possesses a talent and drive that have worked together to successfully establish his reputation as an important contributor to the world banjo community.

Buehling, who has spent his professional career making a serious study of the banjo and its history, can be seen in concert here.

Buehling has toured both inside and outside of this country professionally, in addition to having recorded on various independent labels. Currently, he performs with the old-time string band, The Skirtlifters.

In addition to his love for performing and teaching, over a period of yeras Buehling has collected banjo and mandolin music. He now has over 5.000 solos and orchestrations written for these instruments, dating from 1855, in his personal collection. And while he performs many vareties of banjo music – from traditional to urban fare – his collection interest lies in material written for the very earliest form of banjo up through the ragtime era.

Buehling, whose virtouosity is said to represent a new breed of American banjoists, has over 20 years of teaching experience coupled with a celebrated career as a performer. His spirited presentations have charmed the youngest and oldest of audiences from Amsterdam to Arkansas. And he has earned distinction as a banjoist due to his authentic style and creative finesse. Critics have said that he “must be a true scholar of this music because he captures the sound and flair associated with early 19th century … America.”

His programs include banjo songs, parlor music, marches, waltzes, scottisches, ragtime and presentation of historical minstrel material. Demonstration the early forms of clawhammer and three-finger style, Buehling presents information o nthe banjo and the songs played on it in a light-hearted, pleasing to the ear performance.